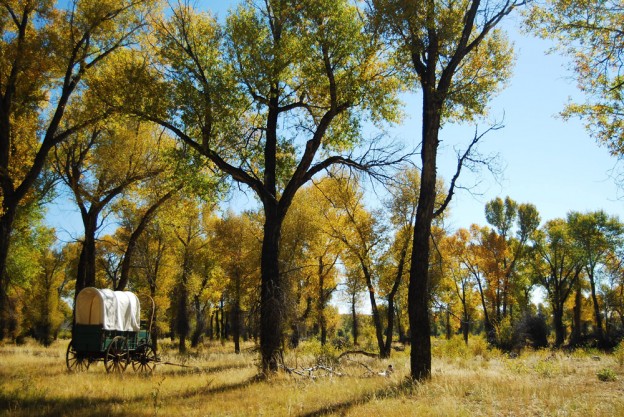 Explore the Lander Trail crossing of the New Fork River and a once-bustling emigrant campsite. Walk the park and imagine what life was like for emigrants 150 years ago. This site has remained mostly undeveloped since the first wagon trails passed through here. The 100-acre park is currently under development, but trails are open for exploration. This park is owned and managed by the Sublette County Historical Society, parent organization of the Museum of the Mountain Man in Pinedale, Wyoming. We hope you enjoy your visit!
Historical significance of the Lander Trail and New Fork River Crossing Historical Park site:
The Lander Trail is part of the federally-designated National Historic Trails. Unlike other emigrant trails that evolved from repeated use, the Lander Trail was actually a constructed road, the first federally funded road west of the Mississippi River. The 256-mile wagon road, built in 1858, started at Burnt Ranch near South Pass, in Wyoming, and ended at Fort Hall in Idaho. It was an alternative to the original Oregon Trail through Fort Bridger, saving up to seven days of travel, avoiding larger desert sections and avoiding expensive ferry crossings over the Green River.The road was engineered and built by its namesake, Frederick Lander. Lander had an extensive background in railroad construction in the east and had been part of the Pacific Railroad Survey in 1853. He worked on improving emigrant trails from 1857 until entering the Civil War in 1861. Lander died from a battle wound in 1862. He estimated that 13,000 emigrants used the new road in its first full year 1859. The road was used extensively until the transcontinental railroad was completed in 1869. The road continued to see some emigrant traffic into the 20th century and played an important role in the settlement of the area.Major river crossings like the New Fork were significant markers for the emigrants because of the peril in crossing, but were also common camp spots. The New Fork River crossing was one of the most difficult on the Lander Trail, and because it followed an 18-mile waterless desert, the crossing was also a camp site for most emigrants. River corridors were later prized homestead sites, so almost all river crossings are now on private land.The Lander Trail Today:
The Lander Trail has been marked and can be followed on public land for much of its length including the 18-mile desert section through the Green River Valley which is bisected by the Pinedale Anticline. The BLM and companies carefully manage the road through the Anticline with a no surface occupancy (NSO) for ¼ mile on each side of the trail. Additionally a 3-mile viewshed buffer limits drilling activities, and best management practices minimize impacts to the road setting.Realistically, it is not possible to eliminate all impacts to the road setting. Instead of mitigating each separate impact to the road (i.e. a new well pad) as natural gas development progresses, these agreements recognize the overall effects over the life of the development and define an appropriate collective mitigation.Plans for the New Fork River Crossing Park:
The New Fork River Crossing Historical Park sits about 5 miles west of the crest of the Anticline and just on the edge of the Pinedale Anticline Project Area (PAPA). The park is 82 acres in size with more than half a mile of river frontage. The setting at the park is very similar to what emigrants experienced 150 years ago. The goal is to leave the area as untouched as possible, so development of park facilities will be minimal. A parking lot is located at the entrance and the rest of the property is accessible only by walking trails with interpretive signs. The park is open in the summer for day use with no overnight camping.Click to view  New Fork Park Brochure2013 New Fork Park Volunteers & Donors