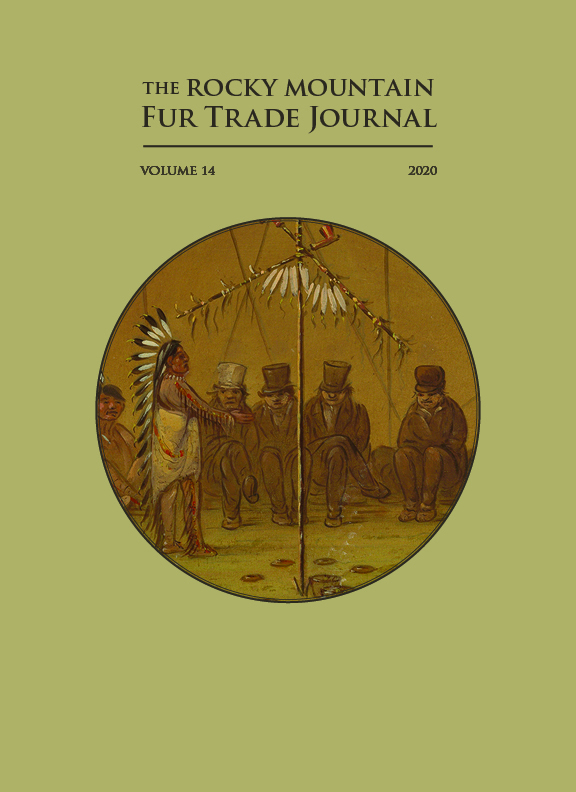 In 1827 Philip Covington moved from Kentucky to Ray County, Missouri only to discover work hard to find. Covington joined a west-bound Smith, Jackson, and Sublette (SJS) caravan, and spent the next year under the command of William Sublette. He worked as a packer and trapper, and attended the 1828 Bear Lake Rendezvous. Returning to Missouri, he used the money earned in the mountains to buy a farm, a good horse, and to present himself as a man with prospects to his sweetheart. 50 years later Covington wrote his memories down and the story was published in a Greeley Colorado newspaper. The reminiscence was rediscovered in the 1980s only to fall back into obscurity. Scott Walker and Jim Hardee’s article, Philip Covington, A Year in the Mountains, 1827-28, presents and examines this little-known account in order to bring it to the attention of a wider audience.

Robert Campbell went west in 1825 with a party led by Jedediah Smith and quickly gained a reputation as hard-working and reliable. By 1832, years spent as a clerk and trapping brigade leader put him in a position to take his own trading outfit to the Pierre’s Hole Rendezvous of that year. A meticulous record keeper, Campbell kept a financial journal of this enterprise. In his article, Robert Campbell’s 1832 Rendezvous Financial Journal, Clay Landry analyzes Campbell’s record of this independent rendezvous trading venture. Landry examines who provided the trade goods in Missouri along with the wholesale cost of those goods, and to whom they were sold at rendezvous, and what the markup was. This is a rare glimpse into the business of rendezvous.

The “Beaver” Hat of Rendezvous

Two generally-accepted ideas about hat making in the early 19th century are not as straight forward as they are assumed to be: that top hats of the period were primarily made of beaver fur, and that most hatters suffered illness from the extensive use of mercury in the trade.  In her first article for the Journal, The “Beaver” Hat of Rendezvous, Arlaina Goddard looks at period records and manuals, to discover that the truth is complicated. By the years the rendezvous were taking place, beaver fur was considered so expensive that it was rarely used to make an entire hat, and that the increased use of mercury paralleled the increased use of inferior furs as substitutes for beaver. Arlaina also explores the rise of mercury-related illness in the hatting industry, and looks for the facts behind what what has become the stereotype of the “mad hatter.”

Stereotypes of the Rocky Mountain Trappers and Traders Revisited

The mountain men of the Rocky Mountains were being stereotyped in popular imagination and literature even as they were still wading in streams, putting their trap sets out. William R. Swagerty has extensively studied how the mountaineers have been characterized from the 1830s to the present. In his article, Stereotypes of the Rocky Mountain Trappers and Traders Revisited, Swagerty presents four major stereotypes he has seen in portrayals of the trappers and traders of the west. His own examinations of data from the lifetimes of these men goes beyond the mythic and suggest ways the mountain men can be characterized in the future. Swagerty’s article steps back from the minute examination of the rendezvous period, and takes an important look at the place the mountain men hold in our culture.