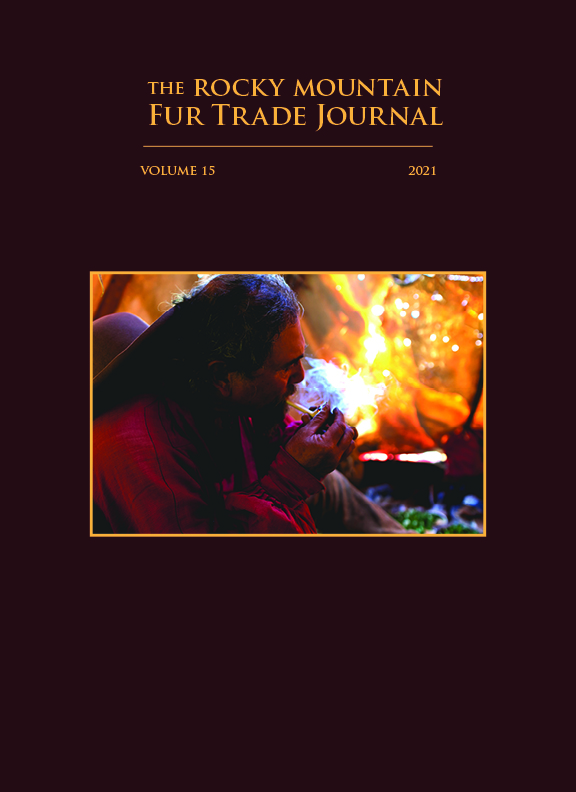 In the Absence of the Indians: Looting of American Indian Graves During the Fur Trade
by Mark van de Logt, PhD, and Dan Jibréus

In their article, In the Absence of the Indians: Looting of American Indian Graves During the Fur Trade, authors Mark van de Logt and Dan Jibréus tell of how 19th century scientists, ethnologists and naturalists, sometimes with the help of fur traders, took human remains from Native burials throughout the West. At the time, it was considered leading edge science to categorize the different peoples of the world based on precise measurements of their skulls. The list of these skull collectors is a surprising who’s who of professional and amateur naturalists and western travelers. Central to the story is a skull taken from an Arikara grave in 1844 that has spent more than a century in a collection in Sweden, and one of the author’s efforts to return it to its people.

Welcome to my Indian Weed! Tobacco and the Fur Trade
by James A. Hanson, PhD

In 1976, when I first visited the Museum of the Fur Trade in Chadron, Nebraska, it opened my eyes to the fact that this is a story far bigger than the fifteen years of the rendezvous. The fur trade connected Native tribes to each other and brought the goods of the world to them, and vice versa. Tobacco was a trade item that made the journey from its origins in the Americas to the rest of the world and back again as an item of international trade. Dr. James Hanson’s article, Welcome to my Indian Weed! Tobacco and the Fur Trade, is the product of Hanson’s extensive study of tobacco as an integral part of the Western fur trade. I want to take a moment to mention and recommend James Hanson’s ongoing project, a multi-volume work, The Encyclopedia of Trade Goods. Whether it is tobacco or cloth, firearms or food, this series brings the world of fur trade material culture, and decades of research into an organized and accessible format. It is like having the Museum of the Fur Trade on your bookshelf.

Grand Ignace: Apostle of the Flatheads
by George Capps

History occasionally remembers ordinary people who have extraordinary influences on events beyond their lifetimes. Grand Ignace was an Iroquois trapper, raised near Montreal, who settled among the Salish people of what is now Montana. Brought up in the Roman Catholic faith, Ignace became part of a quest for missionary priests to bring the religion of his youth to his new homeland. Over time, his story became wrapped in myth, and his identity obscured. In Grand Ignace: Apostle of the Flatheads, George Capps examines period records and often contradictory accounts to uncover the identity of the person whose efforts led to Father Pierre-Jean De Smet attending the rendezvous of 1840 and the missionary work that followed.

The trails used by tens of thousands of westbound emigrants following the rendezvous era were pioneered by trappers, who in turn learned the routes by observing Native American seasonal travel. In Sublette’s Trace: The Fur Trade’s Influence on Emigrant Trails, Jim Hardee follows the history of the routes between the Platte and Kansas Rivers, which, for a time, were associated with the mountaineer and fur trader who laid out the course, William Sublette. Sublette certainly earned his association with the Trace, traveling it first in the winter of 1827. He would eventually make fifteen trips along the route, four transits in one year alone, although by the 1840s, Sublette’s name was no longer commonly associated with the Trace. Hardee’s article examines and locates a fur trade road that grew into an emigrant trail which outlived its original namesake.

The accounts of Nathaniel Wyeth’s Fort Hall provide an invaluable and early record of the business side of the mountain fur trade. The lists of goods brought overland from the settlements, or by ship to the Columbia River to be packed to Fort Hall, tell the story of what was available to customers. Author Michael Schaubs uses these lists as a starting point for careful analysis to identify purchase patterns in The Fort Hall Account Book: Sales Patterns and Seasonal Cycles. Goods recorded in an inventory, and sales recorded on a ledger, reflect the daily life of the fort: the statistics provide insights the narrative accounts of Fort Hall do not contain.