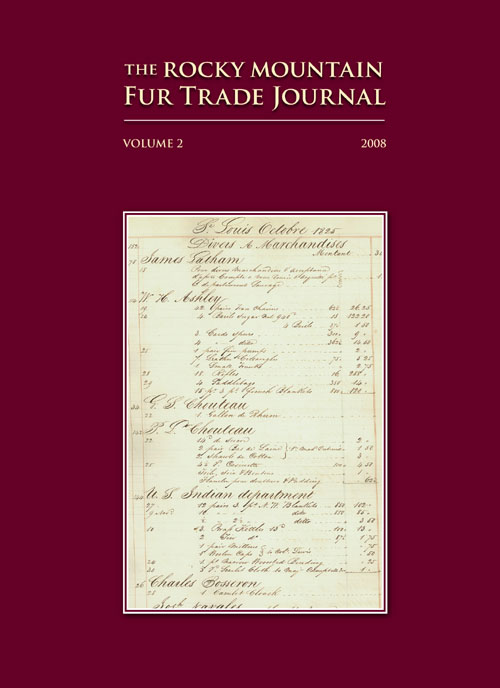 More than 40 people chipped in again to make the second edition of the Rocky Mountain Fur Trade Journal a great success. We appreciate all the authors that were willing to submit papers and give this publication a chance. We also owe a debt of gratitude to the peer reviewers who lent us their expertise and credibility, trusting that this new unknown publication would be worthy of their participation.

The Legend of Jedediah Smith: Fact, Fantasy and Opinion
by James C. Auld

Antonio Montero and the Portuguese Houses: An Outpost on Powder River
by Gary Peterson

“To Preserve Peace on the Frontiers:” Federal Regulation and the Fur Trade
by Dr. Brad Tennant

Sheltering the Fur Trade: Portable and Improvised Shelters of the Rocky Mountains
by Doyle Reid

James C. Auld is an author and independent scholar of early nineteenth-century Western American fur trade history. He lives in Seattle, Washington. Auld attended the University of Wyoming and holds a history degree from Northern Illinois University. He has researched and written about the life and times of Jedediah Smith for over fifteen years. For more information visit www.jedsmithlegacy.com.

Clay Landry of Whitehall, Montana, is a material culture expert of the fur trade with numerous articles, seminars and presentations to his credit over the last sixteen years. Some of his major topics include the gear, clothing and food of the trapper, trade goods, and trade ledgers of Fort Hall. He is a member of the American Mountain Men.

Gary Peterson and his wife Patty have lived and worked in Buffalo, Wyoming, for the past thirty years. Gary is an avid hunter, black powder enthusiast and student of western history. The Big Horn Mountains and Powder River country have provided a rich setting in which to pursue these interests. Gary has written for Muzzleloader Magazine and “We Proceeded On,” the quarterly of the Lewis and Clark Trail Heritage Foundation.

Dr. G. Gage Skinner is a cultural anthropologist currently serving as an adjunct professor and lecturer with the Grossmont-Cuyamaca College District, San Diego, California. Dr. Skinner has held a long interest in the fur trade and in the history of the American West. He has worked in private and commercial beekeeping activities in both the United States and Latin America.

Terrence Ian Dunn received a B.A. in human geography from the University of Wyoming. He is currently a graduate student in American history at the University of Northern Colorado. Dunn also teaches social studies and Advanced Placement U.S. History at Broomfield High School in Broomfield, Colorado.

Dr. Brad Tennant is an assistant professor of history at Presentation College in Aberdeen, South Dakota. He researches, writes, and speaks on various state and regional topics. Tennant serves on the South Dakota State Historical Society, the Brown County Historical Society, and several other national, state, and local historical organizations.

Doyle Reid has been involved in historical reenactment for almost thirty years and is a founding member of the Wind River Party of the American Mountain Men. He resides in the Wind River Mountains of Wyoming, living in a log home he built with the help of his wife Debbie, son Walter and daughter Heather.

James Auld is an author and independent scholar of early nineteenth century Western American fur trade history. He lives in Seattle, Washington. He attended the University of Wyoming and holds a history degree from Northern Illinois University. Auld has researched and written about the life and times of Jedediah Smith for over fifteen years, concentrating on Smith’s early travels from Ohio to Illinois, and his Pacific Northwest Expedition of 1828. For more information visit www.jedsmithlegacy.com.

Steve Banks of Dubois, Wyoming is a lecturer and re-enactor of the Rocky Mountain fur trade. Banks studied western history at the University of Wyoming and has written several articles and produced a web site for Wyoming’s K-12 schools about this time period. Banks is a technology consultant for the Dubois School District.

Nathan Bender is a special collections librarian and archivist at the University of Idaho. He previously headed the McCracken Research Library of the Buffalo Bill Historical Center in Cody, Wyoming and the special collections and archives of Montana State University Libraries in Bozeman, Montana. He has published on western history, folklore, American Indian studies, libraries and bibliography in numerous periodicals.

Michael Casler is a graduate of North Dakota State University. He worked for the National Park Service as a Park Ranger at Fort Union Trading Post NHS for fifteen years. He was the NPS Lewis & Clark Coordinator for North Dakota during the bicentennial. He has published two books: Steamboats of the Fort Union Fur Trade (1999) and The Original Journal of Charles Larpenteur (2007) plus numerous articles on steamboats and the fur trade.

Allen Chronister is a researcher and writer with special interests in the material culture of the Plains Indians and the western fur trade. He has published thirty papers on those topics in journals, periodicals and books over the past twenty years.

Dr. S. Matthew DeSpain is a Visiting Assistant Professor in the Department of History at the University of Oklahoma. He is also the editor of The Journal of Chickasaw History and Culture and a tribal historian for the Chickasaw Nation.

J. D. (Sam) Drucker is currently an archaeologist for the Bureau of Land Management at the Pinedale Field Office with a Master of Arts in Anthropology from the University of Wyoming. Sam has been involved with historic era excavations at Fort Laramie, Fort Caspar and Miner’s Delight and has located and recorded hundreds of inscriptions at Rattlesnake Pass and Devil’s Gate.

Bruce “Burnt Spoon” Druliner has been associated with the American Mountain Men since 1983. His winter quarters are at his cabin on Palomar Mountain, where he teaches outdoor education for the San Diego County Department of Education. Druliner migrates north in the summer, living in and conducting tours of the reconstructed Old Fort Benton trading post in Montana.

O. N. (Ned) Eddins is a Doctor of Veterinary Medicine living in Afton, Wyoming. He has done extensive research on the Plains Indians and mountain men related to the Rocky Mountain fur trade. Ned is the author of the historical novel Mountains of Stone and is the founder of TheFurTrapper.com website.

Doug Erickson is College Archivist and head of Special Collections at Lewis & Clark College inPortland, Oregon, where he has worked for fourteen years. He has published two books on Lewis and Clark and teaches courses at Portland State University on the American West, Archives and Special Collections. He has served as a consultant to many agencies, businesses and organizations.

Todd D. Glover has been an avid fur trade historian for the past thirty years. He spends much of his time researching, experimenting and recreating the lifestyle of the original Rocky Mountain based trappers and traders. He is a member of the American Mountain Men.

Jim Hardee graduated from the University of the Pacific, Stockton, California. He has served as Director of the Fur Trade Research Center since 1998. He is the Museum Factor for the American Mountain Men and is past-President of the Jedediah Smith Society. Jim served as the historical and technical advisor for the History Channel presentation, “Taming the Wild West” and was featured in the program.

Gene Hickman has for many years worked as a historical interpreter, focusing on Lewis & Clark and the western fur trade, and working with the Army Corps of Engineers, the National Park Service, the U.S. Forest Service, Montana Fish, Wildlife & Parks and others. He has written numerous articles related to the western fur trade, Lewis & Clark, and Indian sign language. He also authored, through an NPS grant, a manual for interpreting Lewis & Clark. Gene is a Hivaranno in the American Mountain Men and currently serves as the Brigade Booshway for Montana and North Dakota.

Clay Landry of Whitehall, Montana, is a material culture expert of the fur trade with numerous articles, seminars and presentations to his credit over the last sixteen years. Some of his major topics include the gear, clothing and food of the trapper, trade goods, and trade ledgers of Fort Hall. He is a member of the American Mountain Men.

Alex Miller is a member of the Barren River Party of the American Mountain Men and lives in the Klamath River Mountains of Northern California. He is a staff writing tutor and adjunct instructor at College of the Siskiyous and a regular contributor to Muzzleloader Magazine. He is also the author of A Chronology of the American Fur Trade, a two-volume history work documenting the fur trade from its colonial roots through its Golden Age.

Kerry Oman received his doctorate from Southern Methodist University. He is a two-time Spur Award winner from the Western Writers of America for articles written about the mountain men.

Wynn B. Ormond earned a Bachelor of Science degree from Utah State University School of Business and is the proud father of three boys. He has published in the Tomahawk and Long Rifle. An experienced horseman, Ormond took his first ride with the American Mountain Men in 1999, which inspired his study of horse equipment and techniques of the Rocky Mountain fur trappers. He researches and builds period saddles and equipment and puts them to the test on the trail.

Dean Rudy, a student of western history, is a member of the American Mountain Men, and the creator of the “Mountain Men and the Fur Trade” website (www.mtmen.org). He has degrees from Cornell University and the University of Utah and currently lives in Park City, Utah.

Brad Tennant is an assistant professor of history at Presentation College in Aberdeen, South Dakota. He researches, writes, and speaks on various state and regional topics. Tennant serves on the South Dakota State Historical Society, the Brown County Historical Society, and several other national, state, and local historical organizations.

Dale F. Topham is a native of Orem, Utah, and received his Bachelor of Arts and Master of Arts degrees from Brigham Young University. He is presently pursuing a doctorate degree in American history at Southern Methodist University in Dallas, Texas.

David Vlcek has served as an archaeologist for the Bureau of Land Management in Pinedale, Wyoming, for more than twenty-six years. He has presented numerous papers on western Wyoming’s archaeology, particularly prehistoric settlement patterns in the upper Green River basin, Native American stone circle and rock art sites, reports on Fort Bonneville and other area fur trade sites, the Lander Trail, and much more.

Rick Williams is currently serving as an administrator for Brigham Young University, and is a member of the American Mountain Men. He has also participated in the Living History Days presentations to school children in May at the Museum of the Mountain Man.

Ken Zontek, PhD, teaches history at Yakima Valley Community College in Yakima, Washington and serves as an adjunct professor at nearby Heritage University in Toppenish, Washington on the Yakama Reservation. University of Nebraska Press released his monograph, Buffalo Nation: The American Indian Effort to Restore the Bison, in March 2007. He considers himself both an environmental historian and ethno-historian focused on the North American West.

Fred R. Gowans, PhD, professor emeritus of Western American history, Brigham Young University, is the Historian in Residence of the Museum of the Mountain Man.

Jim Hardee graduated from the University of the Pacific, Stockton, California. He has served as Director of the Fur Trade Research Center since 1998. He is the Museum Factor for the American Mountain Men Association and is the former resident of the Jedediah Smith Society.

Laurie Hartwig, BS, University of Wisconsin-Madison, is the Director of the Sublette County Historical Society and the Museum of the Mountain Man.